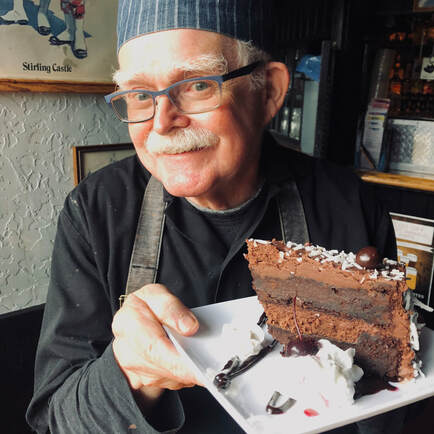 Bob takes the Chocolate Stout Cake
Meet Bob, our baker. Bob has been in the restaurant industry for 50 years! He’s worked on cruise ships in Australia, in retirement homes, logging camps in Alaska, a Zen abbey (for two years), small cafés in London and Paris, a café for the homeless, was an Executive Chef at a university, and several fine dining establishments, including as a Saucier back east. One preparation he remembers fondly is a Beurre Blanc, using 50 lbs. of watermelon reduced into a syrup to make one quart. This special sauce was usually made for a fish dish. He says the most challenging parts of the job are personnel management and time management. It is a satisfying career, because his efforts make people happy, and it enables him to travel. It is also rewarding because of all the different people he meets.

One of his favorite bands is the Rolling Stones. He saw them in Cedar Falls, Iowa before they had massive security. He was standing right at the edge of the runway, where Mick Jagger almost accidentally kicked him in the head. Luckily, he ducked just in time, but otherwise would have been ok with a permanent Jagger souvenir-scar on the forehead.

Besides cookbooks, Bob likes to read Zen Buddhist literature, spy novels, and biographies. His current read is Desert Queen by Janet Wallach. It is the story of Gertrude Bell, an adventurer, advisor to kings, and ally of Lawrence of Arabia.

His words to live by? Live in the moment and be patient.
Meet more Rose & Thistle staff!