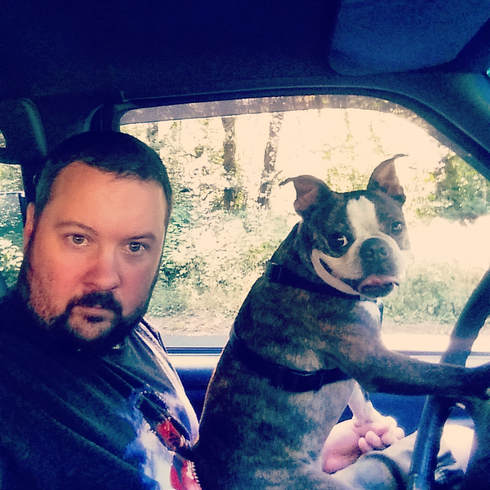 Who is the man behind the pan? That’s Cookie. He’s been with the Rose & Thistle since 2016, working closely with Marty and Kyra to make the shared vision of an evolved menu a reality. Originally from Peekskill, New York, Cookie has lived in Portland, the Oregon Coast, and Tennessee. Roving around the regions of the US, he’s picked up culinary cues for what we enjoy today at the Rose & Thistle. He’s not only refined some established favorites, but brought Buffalo Cauliflower, three different kinds of chicken wings, a vegetarian-friendly dish: “Bohemian Grove,” and a daily “Mac of the Moment” Macaroni and Cheese special to the pub. Not your standard pub fare, eh?

Cookie’s got game, and we’re not talking venison. He's owned a catering company and worked in Tennessee, where he routinely cooked for the hungry masses. He once cooked for 600 people out of his mom’s double-wide trailer. The Bonnaroo VIP pavilion was his domain for six years. It’s no wonder his motto is, “Make shit happen.”

Growing up a New Yorker in the 1980’s, he has an arsenal of stories about spending time at CBGB’s, meeting Joey Ramone at St. Mark’s Place, hanging out at Gino’s Pizza on Avenue A (where Adam Sandler’s character got arrested in “Reign Over Me”), and getting his music fix at Coney Island High.

Music has always played a role in Cookie’s life. He made the pilgrimage to Graceland for his 20th birthday, paying homage to the King of Rock ‘n’ Roll, Elvis Presley. In fact, it’s why he drinks Mountain Valley Spring Water to this day. Favorite albums include “The Blood” by Megalomania, “Rain Dogs” by Tom Waits, anything by NOFX, and “Love Letter” by The Mekons.

An avid reader, Cookie cites “Papillon,” “Walk Across America” by Peter Jenkins, and “Guns, Germs and Steel” by Jared Diamond as some of his never-gets-old standbys. He credits Ray Whitlock as his soulmate and chief chef mentor. His extreme dinner table fantasy is to have the Pope, Neil deGrasse Tyson and Ron Jeremy over where they’d most likely drink Sake, talk about death and nibble on his favorite comfort food: Thai. Cookie loves camping, building fires, skateboarding and working hard. He takes immense pride in what he does and we are super grateful to have him be our Kitchen Grand Master here at the Rat. Oh, and ladies? He’s single…