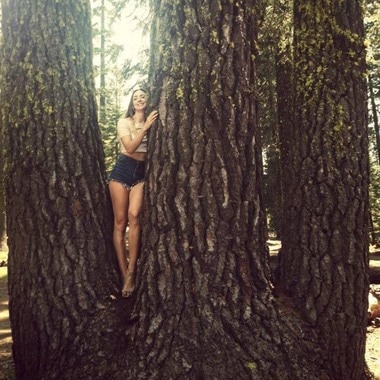 Aerial acrobat, mother, yogi, and server at the Rose & Thistle:  All describe Sarah, a Portland native, who has always followed her heart. Her service industry life started in 2002, when she landed her first service job at Café Mango in Cannon Beach. “I was traveling solo along the Oregon Coast in my Volkswagen van, trying to figure out where I’d like to live. I stopped in at Café Mango in Cannon Beach, applied for a job, and decided to stay a while.” She has always gravitated towards Portland, though, and loves it because while it’s a city, nature is still easily accessible. Forest Park is within city limits, but it also doesn’t take much to pack up and go to the Gorge for a hike or go camping just an hour or two outside of the city.

Being in the service industry since 2002, and at the Rose & Thistle over 10 years, Sarah has picked up various advice along the way. “A random customer at the Rat once told me, ‘Keep your game tight,’ which I thought was stupid at the time.” As she ruminated on this unsolicited advice, it became clear to her that what he meant was more along the lines of: Always have a plan, don’t allow any gaps in that plan, and always strive to do your best. She feels that it is best to follow your heart, but also sees, through her experience, there are circumstances in our culture that make that difficult to do. “Advice is good when it can be followed,” she clarifies. She says she has followed her heart to the best of her ability, but it can be a balancing act to do so, when certain realities may be obstacles.

Her advice to those starting out in the service industry? “Find the positive in all the elements of the job. It’s a blessing to stay active and not have to sit at a desk. Focus on multi-tasking – the more tasks you can do together, the more successful you’ll be. Try to channel your self-starter skills. A lot of times, things can be improved. Co-workers and bosses will appreciate it; don’t wait to be told.”

One of the ways she channels that multitasker energy is through the aerial arts. She experimented in 2012 and loved it so much, she decided to take classes. After a couple of years, she started performing at events, mainly fundraisers. She loves that it is visually artistic, unconventional, and allows for the flexibility of being able to invent your own style and choreography – total freedom of expression.

This flexibility perhaps played into her desire to complete Ashtanga yoga teacher training in 2016. She ventured to Maui, expecting to have some time on the beach to relax, but soon realized the vigors of class, especially as she was in her fifth month of pregnancy. It was an intense program of 8-hour days, six days a week, and no breaks. She studied under Nadia Toraman, whose guru was Sri K Pattabhi Jois, father of Ashtanga yoga.

A quote from David Whyte, an author Sarah discovered during yoga teacher training, “Now, looking through the slanting light of the morning window toward the mountain presence of everything that can be, what urgency calls you to your one love? What shape waits in the seed of you to grow and spread its branches against a future sky?” Her love of service and helping people has lead to a life-changing decision that begins in the fall (she got a scholarship!). Next time you’re at the pub, be sure to ask her about it in person!
Meet more Rose & Thistle staff!